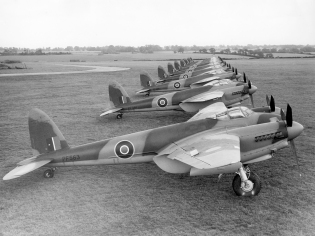 One of Geoffrey de Havilland’s most important pre-war aircraft designs was the revolutionary DH88 Comet, a twin-engined racing monoplane that won the prestigious MacRobertson England to Australia air race in 1934. It was also the basis of the design for the ‘wooden wonder’, the RAF’s iconic Second World War bomber, the de Havilland Mosquito. END_OF_DOCUMENT_TOKEN_TO_BE_REPLACED

A big thank you to all at Horsham Publications, in particular The Holbrook Pages, for their recent article on Heroes and Landmarks of British Aviation.

In 1924 the British government established the Imperial Airship Scheme to develop Britain’s long-distance passenger and mail services to the further reaches of the Empire. Under the scheme the government sought designs for airships that could carry 150 passengers, 40 crew members and cargo to such destinations as Canada, Australia and India.

On 14 March 1924 the Cardington and Pulham air stations were recommissioned and shortly afterwards the Air Ministry awarded contracts for the construction of two new rival airships, the R100 and the R101. END_OF_DOCUMENT_TOKEN_TO_BE_REPLACED