Tillie’s Punctured Romance (1914), a classic, silent comedy directed by Mack Sennett and produced by the Keystone Film Company, notable not only for its star studded cast, which included Marie Dressler and Charlie Chaplin, but also for being Hollywood’s ever feature length comedy.

Charlie Chaplin plays a character far removed from the ‘Little Tramp’, for which he was to become so famous. In Tillie’s Punctured Romance, the big Christmas film of 1914, he plays a womanising city executive who meets Tillie, played by Marie Dressler, after he has a row with his girlfriend, played by Mabel Normand. He soon discovers that Tillie’s father has a large payroll waiting for his workers. He uses his charm to persuade her to elope with him, while secretly plotting to steal her money.

The film was based on the highly successful Broadway play Tillie’s Nightmare, which starred Marie Dressler, who also led a successful US tour with the play between 1910 and 1912.

It is widely regarded that Chaplin’s performance in Tillie’s Punctured Romance predated his creation of the his ‘Little Tramp’, but he had in fact already appeared in more than thirty short films as the Tramp before this film came out.

Tillie’s Punctured Romance was originally released on 21 December 1914 and became a huge success during the Christmas season, playing in theatres well into 1915. 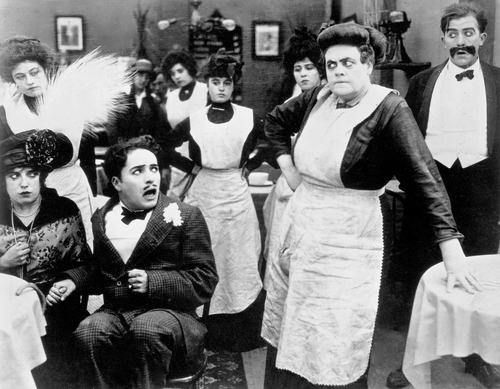 The film’s other main star was the actress, Marie Dressler. By the early 1920s her career had virtually ground to a halt. Unable to find acting work she supported herself working as a maid. However, thanks to the intervention of screenwriter Frances Marion, her career had a significant resurgence between 1930 and 1933, when she beat Greta Garbo and Joan Crawford to become the exhibitors’ poll’s most popular actress three years in a row. She also became one of MGM’s biggest stars, featuring in Min and Bill (1930), for which she won an Academy Award, and Tugboat Annie (1933). She died of cancer the following year at the age of sixty-six.