HMS Repulse and HMS Prince of Wales were attacked by Japanese aircraft off the coast of Malaya on 10 December 1941, just days after their devastating raid on the US base at Pearl Harbor. Repulse and Prince of Wales became the first capital ships to be sunk solely by air power on the open sea.

HMS Repulse at the back with HMS Prince of Wales in front, under attack from Japanese forces. HMS Electra or Express is manoeuvring in the foreground.

A significant factor in the sinking of Prince of Wales came as a result of damage that she received from the first wave of torpedo bomber attacks. The ships surface scanning radar was inoperable and deprived Force Z of its early-warning system, which contributed to the impact of the surprise air strike. Both ships sank as a result of repeated torpedo attacks, Repulse finally lost its battle on the fourth wave.

Seven months earlier Prince of Wales had attacked the Bismarck and Princ Eugen in the Denmark Strait as the German ships attempted to break out into the Atlantic Ocean. It was during this engagement that HMS Hood was sunk, from which there were only three survivors from a complement of 1,418. 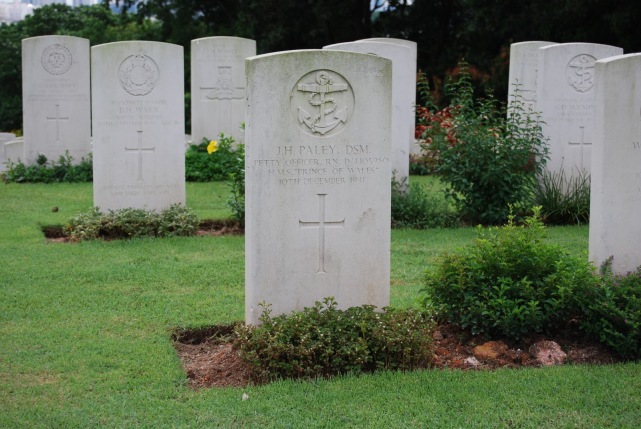 The loss of the Prince of Wales and Repulse on 10 December 1941 cost the lives of 840 British servicemen, some of whom were laid to rest at the Kranji military cemetery at Singapore. This photograph was taken in 2010 during a visit to Singapore and shows the graves of some of those that lost their lives that day.