In 2004 Soundstage Communications produced a special centenary recording of JM Barrie’s classic Peter Pan, the story of the mischievous boy who never grew up. The production was adapted for the radio from the stage play, first performed in December 1904.

Peter Pan is a mischievous boy who can fly and never ages, spending his never-ending childhood adventuring on the small island of Neverland as the leader of his gang, the Lost Boys, interacting with mermaids, Indians, fairies, pirates, and occasionally ordinary children from the world outside of Neverland. 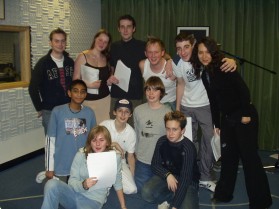 Peter Pan first appeared in a section of The Little White Bird, a 1902 novel written by J.M Barrie for adults. However, the character’s best-known adventure first appeared on 27 December 1904, in the form of a stage play entitled Peter Pan, or The Boy Who Wouldn’t Grow Up. The play was later adapted and expanded into a new novel, Peter and Wendy, published in 1911.

The centenary production of Peter Pan was produced and adapted for the radio by Richard Edwards and directed by Jason Rosam.