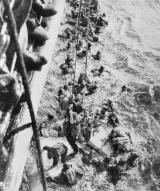 The Bismarck’s crew was made up of just over two thousand men. Following her sinking, only 114 survivors were plucked from the sea, 110 of them by HMS Dorsetshire and the Tribal-class destroyer HMS Maori. The rescue of survivors was called off by the captain of HMS Dorsetshire amid reports that a U-boat may be in the area.

Later, three of the survivors were indeed rescued by a U-boat that made it to the scene and a further two were rescued by a German fishing trawler.

For more on the hunt to find and sink the Bismarck take a look at John Moffat: Legend of the Bismarck. Click here to read the Kindle preview.

John Moffat: Legend of the Bismarck, the latest release in the British Flying Legends series and tells the remarkable story of a Fleet Air Arm flying legend who, with a single torpedo strike, delivered from an obsolete biplane, in a force nine gale, in the middle of the Atlantic, brought about the sinking of Germany’s most powerful battleship, the Bismarck.

In addition to exploring John Moffat’s early life and his role in the sinking of the Bismarck, this book also looks at the dramatic sinking of HMS Hood, the story of HMS Ark Royal and the aircraft that helped deliver the decisive torpedo attacks, including the out-dated Fairey Swordfish biplane.