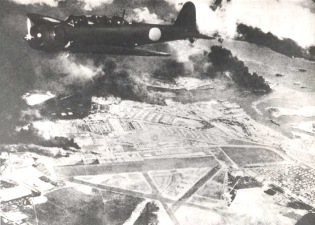 The Japanese learnt valuable tactical lessons from the British Fleet Air Arm for their attack on Pearl Harbor.

In early 1941 a group of Japanese naval officers on diplomatic duty in Berlin were escorted by the German Abwehr on a liaison visit to Italy. In Rome the Japanese were introduced to the Italian naval authorities and asked if they could investigate the secrets of the Royal Navy’s Fleet Air Arm attack of November 1940 on the Italian battleships in Taranto Harbour.

A double agent working for the British MI6 secret service acquired the intelligence from a conversation with his Abwehr control officer whilst visiting Lisbon. Unbeknown to the West the Japanese Navy was planning an attack on the US naval base at Pearl Harbor in Hawaii. Admiral Isoroku Yamamoto, commander of the Imperial Navy’s Combined Fleet, had advised his Navy Minister on 7 January 1941 that a decisive strike crippling the US fleet would bring about the subsequent defeat of the British and Allied forces south of the Philippine Islands. The Japanese knew that if they were to succeed the secrets of Taranto had to be unlocked.

On 10 November 1940 Glenn Martin Maryland reconnaissance bombers of 431 Flight, flying from RAF Malta, photographed the roads and harbour of the Italian naval base at Taranto and revealed the presence of six battleships and miscellaneous naval vessels. The decision was immediately taken by the British Admiralty to attack.

The following day HMS Illustrious, under the command of Rear Admiral Lumley Lyster, escorted by four cruisers from the 3rd Cruiser Squadron and four destroyers from the 2nd Destroyer Flotilla, launched aircraft from forty miles south-west of the island of Cephalonia and 170 miles south-east of Taranto. The first strike of twelve  torpedo bombers took off at 8.57 p.m. under the command of Lieutenant Commander Williamson of 815 Squadron. Six of the aircraft were armed with torpedoes, four with bombs and two with flares and bombs. The aircraft, with open cockpits and unescorted, flew at a height of 8,000 feet. Taranto Harbour was guarded by balloon barrages, guard ships, shore batteries and anti-aircraft sound detectors, whilst the Italian warships were protected by torpedo nets.

At 11.00 p.m. flares were dropped over the eastern side of the outer harbour, the Mare Grande. The torpedo bombers dived down to 4,000 feet, then to a height of 30 feet over the harbour to make their torpedo runs. Meanwhile, the Swordfish aircraft armed with bombs attacked and destroyed the cruisers in the inner harbour, the Mare Piccolo, as well as the port installations. A second strike of nine Swordfish aircraft under the command of Lieutenant Commander JW Hale RN of 819 Squadron comprised five aircraft armed with torpedoes, two armed with bombs and two with flares and bombs. Once again, the same method of attack was used as the Italian naval forces put up a heavy curtain of anti-aircraft fire.

As the low-level attack proceeded anti-aircraft shells from the Italian batteries crashed into ships and harbour facilities as the gunners trained their weapons on the low-flying torpedo bombers. Later photographic reconnaissance of the harbour showed the battleship Littorio disabled with three torpedo hits and probably out of action for at least a year. The battleship Caio Duilio beached having received one torpedo hit and the Conte di Cavour sunk in shallow water after being struck by one torpedo. The heavy cruiser Trento had been hit by a heavy bomb, whilst the destroyers, the seaplane base and the harbour fuel tanks had sustained heavy damage.

Overnight the strategic balance in heavy capital ships in the Eastern Mediterranean had changed in favour of the Royal Navy. Allied convoys could now sail from Gibraltar to Alexandria without interference. The Japanese officers carefully evaluated the tactics used by the Royal Navy during the course of their successful attack and took their findings back to Tokyo with them.

At 0749 on 7th December 1941 Commander Fuchida HIJMN with the first wave arrived over the target area, gave the command to attack and signalled Admiral Nagumo in the flag ship with the coded word ‘to, to, to’, which were the first syllables of the Japanese Totsugeki meaning charge! This word was used to indicate ‘the first wave attacking.’ Thus America was brought into the Great Pacific War.

On the 8th December 1941, the United States declared war on Japan. The British Prime Minister, Mr. Winston S. Churchill, when informed in London that the Japanese had attacked the American fleet at Pearl Harbour, is reputed to have said ‘that he slept the sleep of the thankful – and saved!’

For more information on military conflict in the Pacific in the first half of the twentieth century take a look at The Rise and Fall of the Japanese Imperial Naval Sir Service by Peter Edwards.

The book is published by Pen and Sword Books (Aviation) and is currently available in hardback, priced at £25.00. The ISBN reference number is 9781848843073. Click here to order your copy.

For more information on British airships and other British aviation heroes and landmarks take a look at Heroes and Landmarks of British Aviation by Richard and Peter Edwards.

The book is published by Pen and Sword Books (Aviation) and is currently available in hardback, priced at £19.99. The ISBN reference number is 9781848846456. Click here to order your copy.