By far Geoffrey de Havilland’s most important pre-war aircraft design concept was the DH88 Comet twin-engined racing monoplane, not only because this machine won the 1934 MacRobertson England to Australia air race but also because it was the inspiration for the Mosquito. 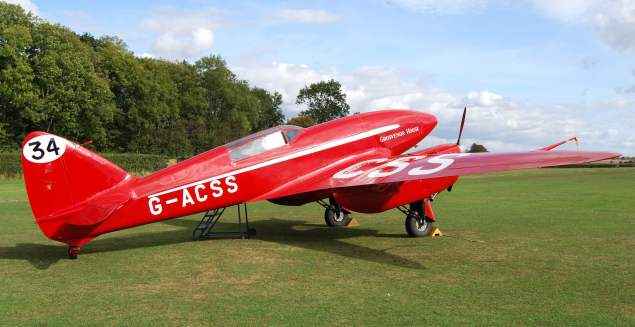 In 1934 the Lord Mayor of Melbourne proposed organizing an air race from England to Australia as part of the centenary celebrations marking the founding of the State of Victoria. Australian confectionery magnate Sir MacPherson Robertson agreed to offer a prize fund of $75,000 AUD providing that the race was named after his company. The race was organized by the Royal Aero Club and the course covered some 11,300 miles from RAF Mildenhall in Suffolk to the Flemington Racecourse in Melbourne, Victoria.

de Havilland was determined to win the race and set about designing a revolutionary new aircraft. The result was the de Havilland DH88 Comet racing plane. In just nine months on 9 October 1934 the new plane received its certificate of airworthiness.

A total of three machines of this type were manufactured and all three competed in the race. The first was Comet G-ACSR, which was built for Bernard Rubin and painted green. It was piloted by Owen Cathcart-Jones and Ken Waller. The second Comet was G-ACSP, which was named Black Magic and was painted black and gold. It was piloted by its owners Amy and Jim Mollison. The third was Comet G-ACSS, which was ordered by Mr AO Edwards, the managing director of the Grosvenor House Hotel in Park Lane, London. It was painted a distinctive scarlet and was aptly named Grosvenor House. The pilots were Charles Scott, the former record holder for the route, and Tom Campbell-Black.

The race included five compulsory stops at Baghdad, Allahabad, Singapore, Darwin and Charleville. In addition to these the organizers had prepared a further twenty-two refuelling stops. By the time the race was due to start on 20 October 1934 an ambitious array of some sixty entrants had been cut to a mere twenty.

Despite their engine problems Scott and Campbell-Black developed a commanding lead and crossed the finish line at Flemington Racecourse, Melbourne, at 3.33 p.m. on 23 October 1934, with a total elapsed time of 71 hours, some 18 hours 47 minutes ahead of the DC-2. G-ACSS Grosvenor House qualified for both the fastest time and handicap prizes. Unfortunately, the race rules only allowed one prize per aircraft and so G-ACSS was only awarded the fastest time.

Owen Cathcart-Jones and Ken Waller in G-ACSR arrived safely, crossing the finish line in fourth place. Shortly after touching down they were loaded with newsreel footage of the race and took off again for RAF Mildenhall. Their return journey set a new record for a round-trip, completing the whole journey in a little over thirteen days.

G-ACSS was restored for the Festival of Great Britain in 1951 by de Havilland apprentices, where it was put on display hanging from the roof. The aircraft was given to the Shuttleworth Collection in 1965 and following an appeal for funds it was restored to full flying condition. It flew for the first time in forty-nine years on Sunday 17 May 1987.

The de Havilland Engine Company was established in 1944 and was based at Leavesden, near Watford in Hertfordshire. Originally the company was the engine division of the de Havilland Aircraft Company and was responsible for the de Havilland Gipsy engines. The company was merged into Bristol Siddeley Engines in 1961, which was sold to Rolls-Royce in 1966. The factory is now the location of Leavesden Film Studios, home to many major film productions, including the Harry Potter series of films.

For more information on the de Havilland Comet DH88 racing aircraft and other aviation heroes and landmarks take a look at Heroes and Landmarks of British Aviation by Richard and Peter Edwards. The book is published by Pen and Sword Books (Aviation) and is currently available in hardback, priced at £19.99. The ISBN reference number is 9781848846456. Click here to order your copy.