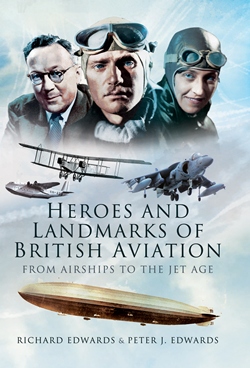 LONDON: This month Pen and Sword Books has published Heroes and Landmarks of British Aviation by Sussex authors Richard and Peter Edwards. The book tells the dramatic story of Britain’s aviation pioneers, those who risked everything to be the first into the air, to fly the highest, the fastest and the furthest.

The book is written by Richard Edwards and uses some of Peter’s previously unpublished material. It is published twenty years after Peter died in 1992. Richard said, “I’ve shared with my late father a lifelong passion for military history and it’s heart-warming to be able to share an author credit with him.”

The book celebrates the people, aircraft and achievements that make up Britain’s aviation history, from humble airship developments to the demise of Concorde and supersonic passenger flights. Many famous names and aircraft are documented, including Amy Johnson and her around-the-world-flight, Geoffrey de Havilland and the world’s first operational jet airliner, RJ Mitchell and the development of the Spitfire, Frederick Handley Page and the birth of Imperial Airways and Frank Whittle, the inventor of the jet engine.

Richard Edwards lives in Horsham, West Sussex and has worked in the media for many years. He has produced a wide range of radio documentaries and features and has contributed to numerous newspapers and magazines.

Peter Edwards wrote The Rise and Fall of the Japanese Imperial Naval Air Service (Pen and Sword Books, 2010) in the late 1980s, but passed away before he was able to see it in print. Richard published the book posthumously in November 2010. Peter was born in London and moved to Worthing, West Sussex with his family in the 1980s. He served in the RAF from 1945 before becoming a school teacher. He died in 1992 at the age of 63.

For more information or to request a review copy: